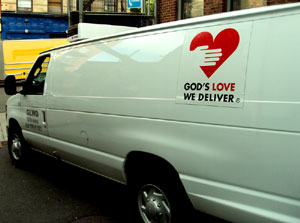 The Meaning Behind the Process:

In my last post, I discussed the basics of what I actually did at God’s Love We Deliver.

In this post, I’m going to talk about the significance behind each of the 3 steps I discussed in my last post.

The three steps: preparing, packaging, and delivering were more than just actions. They were more significant than that and I think that they made each of us realize some pretty amazing things.

It’s crazy to think about how many meals we made for so many people. Over the course of my 2 days in the kitchen, my group made close to 4,000 bowls of soup. We also packaged probably close to 1,000 or 2,000 full meals for people and they looked pretty good.

It’s funny because you would think these meals wouldn’t look good but they actually smelled so good that we all wanted to eat them for ourselves. It was a relief seeing how good these meals were and knowing that they were actually healthy and nutritious. All of the vegetables in the kitchen were so fresh as well.

I think the biggest thing that stood out to me is how many people we are actually touching with these meals. It’s crazy to think that those 4,000 bowls of soup we made were each going to different people. It’s also crazy to think that there are so many people out there that need meals like this, and only a small percentage of people who need them are actually getting them.

Similarly with the packaging, it amazed me how many full meals we actually packaged. My group of 4 did about 4 to 5 full routes with 50-60 full meals in each one. In total we probably packaged 300+ meals.

Every single meal we packaged was different in some way. Some people had modified meals because they couldn’t eat some of the regular meals for a certain day. There was even vegetarian options as well as meals for children. Some clients received 4 bags of food filled with soup, entrees, bread, breakfast, and desserts.

It really showed just how generous this organization was when I saw that there was full meals prepared for each child of the family. There were also some clients that received meals for their caregivers as well.

This organization does not take financial background into consideration when accepting a client and it is amazing to me that they not only provide for so many sick people, but also their caregivers and children.

It was crazy to see how many meals and routes we finished and also how efficient the process was. We were able to get so many meals done in so little time, that way they’d be able to get them to the client as quick as possible.

Let me start off by saying this was HARD work! Personally, I went to Queens and delivered to mostly houses, but some of my other group members delivered to mostly apartments. They told me they climbed a lot of floors and got lost pretty much every time.

Just going on deliveries for one day was beyond tiring physically and I can’t imagine how these drivers do this BY THEMSELVES monday-friday.

One thing that was really cool about the deliveries was that they had the same routes every week. My driver Al, knew all of the clients and knew their habits. He knew which ones answer the door, which ones are hard at hearing, where to leave the bags if they don’t answer, and which ones you needed to call to tell them you were outside.

The deliveries were very personal and each person who answered the door seemed very happy to see me. Almost every person I gave the food to said “God bless you” or something similar. They were so genuinely thankful and appreciative for the food I was giving them. It’s crazy how something that seemed so small to me was probably the highlight of their week. I think this just really made me realize how lucky I am to have parents that are able to put food on the table and be healthy.

Being able to volunteer in all three parts was very significant. Thankfully I was able to see this entire process come full circle. I am also really happy that I got to see just what it took to make one meal for one person. It absolutely amazed me to see how many meals were prepared and how many people were touched by this organization.

I’m sad to see that this type of food service is only in New York City. Yes, there are of course smaller organizations across the country, but nothing as well known and to this scale.

This organization touches so many lives and helps so many sick people and their families. I hope as more and more people volunteer and spread their message, more of these organizations can pop up nationwide.

I hope that one day, I can do something to make this a nationwide effort and help spread God’s Love to people in every state that are sick and in need.